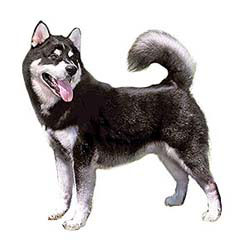 The Malamute's beginnings can be traced to the Mahlemuts, an Inuit tribe that lived in northwestern Alaska. These powerful dogs with warm double coats could haul heavy sleds from village to village or from seacoast to village. The dogs weren't fast, but they were strong and steady. They also were excellent hunters of seals and protected the Mahlemuts from polar bears. During the Gold Rush of the late 1890s, would-be prospectors brought their own dogs with them. Some bred them with the Malamute in an effort to produce a speedier sled dog. The interbreedings could have resulted in the loss of the original Malamute, but Eva Seeley initiated a breeding program in the United States. Her efforts saved the breed, which was recognized by the American Kennel Club in 1935. In 2006, the Malamute ranked 57th among the 155 breeds registered by the club.

The Malamute had to cultivate certain traits to survive Alaska's harsh climate, particularly independence and territoriality. Instinctive obedience would not have helped a dog to survive, much less thrive in Alaska. The need for sled dogs to scrounge up whatever food they could get may prompt the modern-day Malamute to raid trash cans and steal food from counters. Generally, the Malamute is a friendly dog who likes being with people and getting human attention. However, early socialization and training are crucial to keep the dog's natural rowdiness under control and to teach him to respect his owner's leadership. The dog usually doesn't bark much, but may exhibit an extensive vocal repertoire of howls and yips.

The dog's thick undercoat and long, coarse guard hairs typify those of northern breeds such as the Siberian Husky. The Malamute sheds this coat twice a year. The outer coat can be white, black or red; the undercoat can be the same or another color. The undersides of his body are always white. He has a full, bushy tail.

The Malamute's confident, dominant, strong-willed personality requires expert training if the dog is to live happily with his people. Consistency and firmness will win the respect of the dog. His opportunism and interest in food makes positive training with treats the most effective way to teach what's expected of him. As with all dogs, harsh and coercive methods are useless.

Like all purebred dogs, the Malamute has a number of congenital health problems. These include hip dysplasia, cataracts, progressive renal atrophy, bleeding disorders and dwarfism. Any dogs intended for breeding should receive OFA, CERF and dwarfism screenings first.

© Copyright 2014 LifeLearn Inc. Used and/or modified with permission under license.